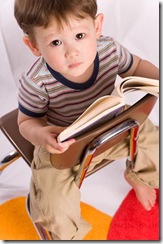 I just have to give my little Ollie some credit cause he is just the sweetest. He asked for some more milk this morning, which he did by holding out his sippy cup and saying “smore?…smore?” So, I took it and he softly put his head down and said “Tang koo” (thank you) as he walked away.

Then he watched me pour the milk and apparently I did an awesome job cause he threw up his hands and shouted “Yay! You did it!”. hahaha. Such a supportive little sweetheart. It made my morning. :)